Posted on February 17, 2014 by carrolldupray

Yes!  I would have gladly traded places with my husband, below.  But, it was impossible.

I was directed to a cabin two decks above the main deck, up one set of stairs, reasonable, and the second very steep.  More like a sort of ladder.  (You do recall my “condition”?)  I was alone in the small cabin, with a porthole, a good thing..  Jim and I could have easily shared this space.  It must have been against government regulations.  The bathroom was “down the hall” for use of several cabins..  The most outstanding memory of that area was the awful stench that lingered in spite of being spotlessly clean.  I would suck in a great breath, dash in, and, well, I never did take in enough breath.  Every “head” aboard ever ship I’ve ever been on has the same odor–upchuck–it lingers.

Soon, the first meal aboard was served.  The menu is engraved in my mind.  Salisbury steak, mashed potatoes, gravy and green beans.  The long tables were prepared for us with white linen, United States Navy engraved (USN), silver, and a goblet at each place.  We lined up cafeteria style, received a white plate with a pattern around the edge and a distinct naval emblem upon it and were thus served, returning to our assigned seat.

I was truly glad to be aboard this ship and on my way back stateside.  But, from the moment my foot left the gangplank, there was a peculiar feeling amidships.  Not lost on me were the open “barf bags” lined up along the center of that beautifully set table.

A French girl sat next to me.  The food was most agreeable to her and she ate the American cuisine with gusto.  I was having problems.  I leaned on my left elbow, with my hand in a sort of salute, shading from view those bags before me.  I was hungry and knew I had to eat and began working slowly, bite by bite.

My French neighbor rose from her seat, made her way out of the galley door just behind us.  I heard her losing all of her supper over the side of the ship.  She re-entered the room, took a place in line and had a plate refilled, sat down by me and began again to dine.

That night the ship pitched fore and aft in quite a normal way, I imagined.  I could not stop it anyway, and it made me sicker by the minute.  My feet fell with the rhythm of this movement, and then my head rocked backward upon the pillow with a “whomp, whomp, whomp.”  I surely did not sleep much.  I remained in bed the next morning.

The Navy steward cracked open my cabin door.  This was a fellow who would never be tipped. He was there to see to my basic welfare, neither my entertainment nor pleasure.

“Mrs. McReynolds!” he began sternly.  he must have known all of my conditions.  “I know you do not feel well,” he said firmly, “But, you must get up and go to the mess and eat.  You HAVE to get something in your stomach!”  His firm pronouncement was neither a bit tender nor compassionate.

“But, if you do not,” his voice softened, “I will bring you black tea and soda crackers.”  He closed the door quietly.

“WELL? Did you get aboard the ship? Did you GO?” was the first query I had from the first blog reader.

Posted on February 14, 2014 by carrolldupray

“There is one chance,” the little clerk glowered, “You are to go see Major Drummond, the medical officer aboard the ship.  If he agrees, you might depart as the orders specify,” as he scribbled directions on a piece of paper, gave it to my husband and turned back to shuffling papers around his important work.

What a tangle.  This sort of thing happens all of the time to military families.  Off to see the doctor.

After Major Drummond perused my medical records, did a cursory examination, he grinned and remarked, “Well!  We’ve not had a baby born aboard ship in years.  I think this is just fine.”  He didn’t really expect one to be born on this crossing, either, it seemed to me.

And the gangplank was let down for us and our luggage, part of which had disappeared long ago, with our car, on some other ship.

We both innocently smiled.  This was working out just fine.  That smile lasted about two hours, when my sergeant husband learned the ship was overloaded.  HE was to join all the troops below decks, from previous experience, a grievous place, a dictionary describing it as: causing grief, sorrow, anguish, pain and physical suffering.  All true.  However, before long I would have gladly traded places with him.

Posted on February 3, 2014 by carrolldupray 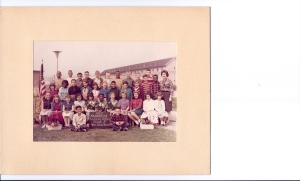 The favorite place I can find on a ship is the most foreward spot on the main deck where I can stand. The wind blows my hair and is fresh on my face. The wake splits in two at the bow The ocean is lovely–whether a bit stormy or clear blue. I don’t feel sick standing there, bundled up properly.
WHY IN THE WORLD did Uncle Sam cut orders on my sergeant husband to return to the States on the USS Butner in the summer of 1954? BUT~they were cut! And to be changed? The United States Army moves so ponderously slow when it wants to, and it seemed so now.
We packed up, reported to Bremerhaven to board the USS Butner. I was expecting our first child in two months, an obvious fact, well known at the military Schwabinger Krankenhaus in Munich. When the Sergeant in charge saw my advanced state there was alarm in his visage.
“How can you travel back to the United States?” he blurted out to me.
I was on the orders! How could I remain behind?
“Well! You can’t travel!” he glumly asserted, with a tone in his voice that indicated we had organized this problem all by ourselves. What were we to do?
“You will remain in Bremerhaven until the child is delivered, plus six weeks after,” he pronounced irritably! I had flummoxed the United States Army! Wasn’t the first time, or the last.
My husband and I were dumbfounded. Why were these orders cut? Where would we live? How did this come to be?

This is an excerpt from the up and coming book about “Military Family Life.” A good title is lacking. Join the contest ~ free book to the winner~

This blog is intended to eductate